So another part of the character design class was going over the basics. The range of talent was pretty broad, from professionals wanting a refresher to people who just wanted to take an art class. There were weekly assignments on top of the semester project, so there was always something to work on. One of the first projects were feet and hand studies. Brings back memories from Ringling for sure! So yeah, pretty simple and straightforward. 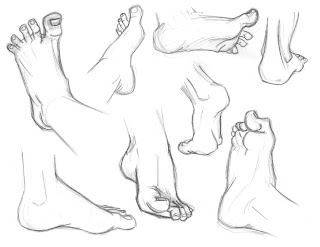 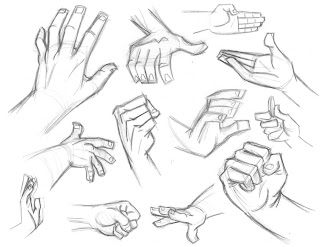 Posted by Matt Swartz at 6:10 PM No comments:

And now, the rest of the story. This is the final "pitch" we presented at the end of class. I didn't get as far as I would have liked, and I think there is still a lot of work to be done, but it was a good learning experience, and got me back in the grove of things. For the final, I knew I wanted to paint something, just to show another skill set, since most everyone was working digitally. I don't think it's portfolio ready, but I wanted to show everything involved in this project. You might notice some stylistic differences in some of the sketches, because half way through the design process, our instructor told us an "art director" wanted a different look for the project. It threw some people off, but was meant to show a possible real world situation. I definitely like the more stylized/simplified versions more :) 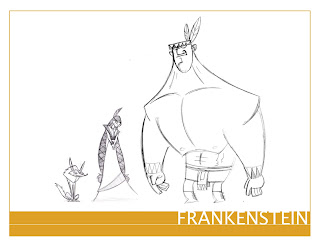 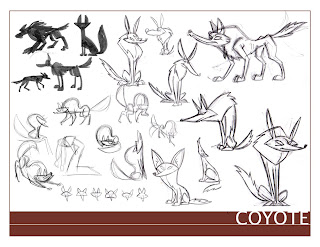 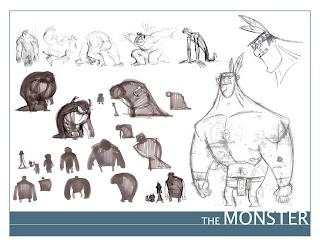 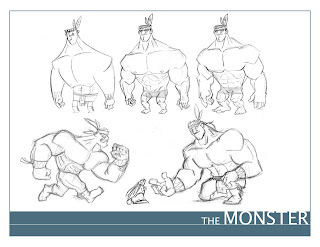 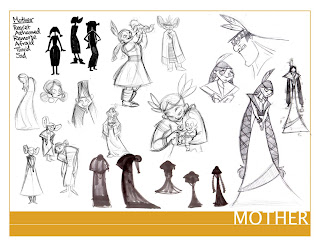 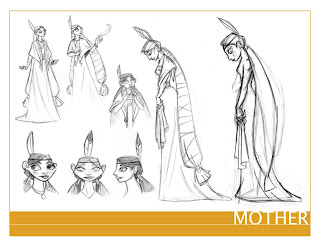 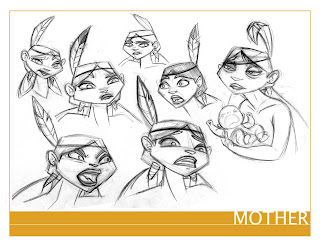 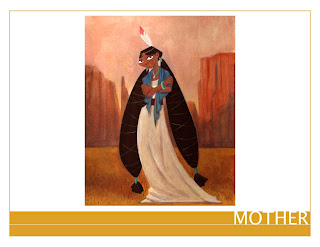 Something that was actually really fun and I never really did, was to create a reference/mood/inspiration board. I always have reference, but I never compiled them on the same page. It's pretty interesting, trying to figure out which images have more significant value to a project and which ones to leave out. The other thing to think about, if designing for animation, is to trying to imagine who would portray/voice your character. It was really was hard in my case, trying to think of someone young enough that could express those rage of emotions. But over all, I highly recommend this, it's a great way to gather your thoughts and ideas for a project or painting. 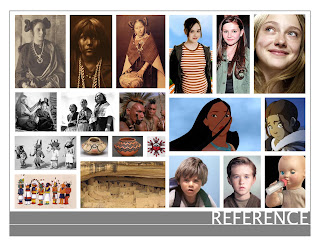 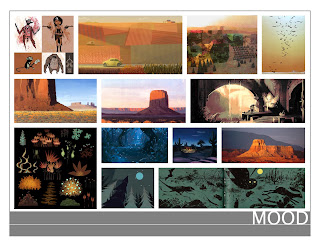 
This is the project from the Character Design class I took in the fall. The main assignment was to redesign Frankenstein, and to incorporate 1 male, 1 female, and 1 quadruped. Some people designed a more straightforward version of the story, while I took a "slightly" different approach. And by "slightly", I mean it's almost unrecognizable as Frankenstein.

My version was set in the North American southwest, with a young Hopi Indian Mother, who tragically lost her first born son. Distraught over the death, she turns to the mystical Coyote, asking for him to return her son to her. He warns that there could be severe repercussions for tampering with the Spirit World, but the young Mother begs. Coyote grants her request, using his powerful magic to bring her son is brought back from the dead! The son is reborn as a Monster, angry and disfigured, nothing like Mother remembered. She shuns the Monster. Confused and upset, the Monster goes on a rampage. When Mother asks Coyote to undo it, he tells her that she must be the one to stop him. He explains that all of her twisted emotions and guilt over losing her first-born has changed his appearance. She must accept that it was not her fault, and to celebrate the life he had, and not to morn the life he lost. She races to find the Monster and stops him from destroying anything more. She confronts him, and her emotions, and makes the toughest decision of her life. She lets go of her guilt and her own anger. As this happens, the Monster transforms into a tiny spirit form of her son. Mother can finally say the goodbye she needed to say, and lets her son return to his rightful place with his ancestors in the Spirit World. 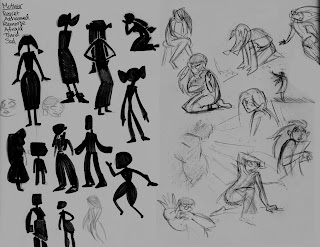 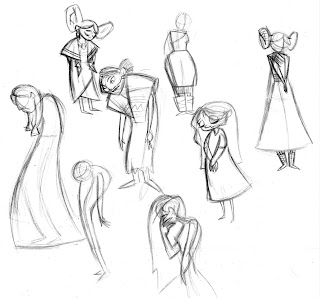 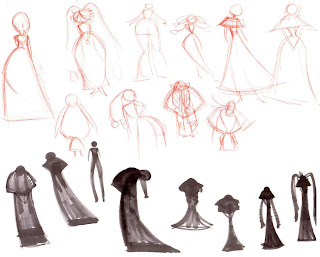 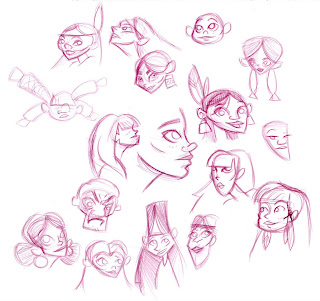 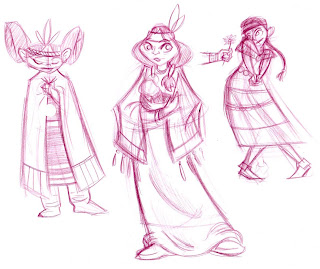 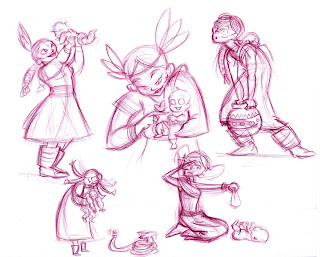 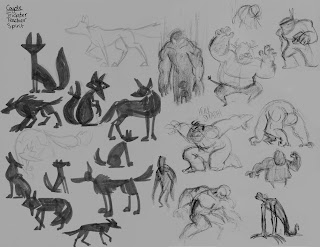 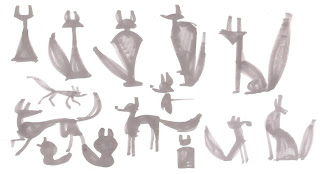 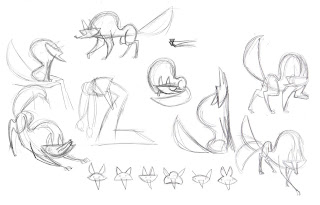 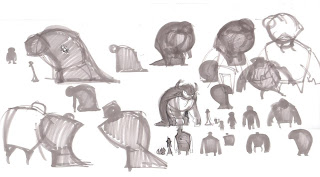 So yeah, really different. When brainstorming, I really liked the idea of magic creating the monster, instead of technology. I also liked having a clear setting/environment to design from. The assignment was also really different form anything I'd normally do, so i was really excited. This is just the development for class, I'll post the more final stuff in another entry. Tell me what you think so far!
Posted by Matt Swartz at 7:20 PM 1 comment:

I'm back! No really, I promise. I know it's been a year since I lasted posted (crazy), but a lot has happened to me. I was working, felt unproductive artistically, got motivated, took a Character Design class, completed a mentorship with the awesome David Colman, and got a new job!!! Woot! The new job is a huge breathe of fresh air, and is exactly what I needed. I feel so motivated again! Anyway, with all of these happenings, I've decide to resuscitate my poor forgotten blog. It's taken me a while, but I think i finally found it's purpose. It's a visual time capsule! A digital sketchbook! It's not always going to be pretty or exciting, but a way for me to look back and see how far I've come. I'm not going to worry about silly sketches or imperfect paintings. Too many times has that happened before, causing me not to post at all. And thats no fun. And who knows, maybe I'll incorporate some other things, like things I find inspiring or awesome artists I stumble upon? Sound cool? I think so. Well, enough talking, let's post!!!
Posted by Matt Swartz at 6:11 PM No comments: 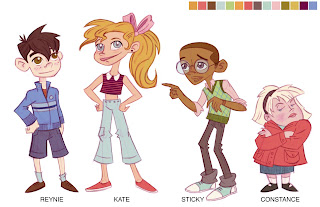 So remember that project from last year? Well, this is the result of it, and as you can see, I didn't get very far. These character designs are inspired by the book "The Mysterious Benedict Society". It's awesome, and if you are a fan of mystery/detective young adult books, then I highly recommend it. So when I was working on it, it just boring. The character designs aren't particularly unique or interesting, just ordinary. I really like the color pallet and the original story, but that's about it. But for the sake of sharing, and trying to get better about posting, here it is. Let me know what you think, I'd love to hear your opinions and maybe get motivated to work on this project again.
Posted by Matt Swartz at 12:36 AM No comments: 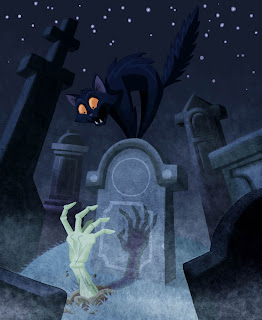 I know, I know. Halloween was LAST week, and I'm just now getting my post up. But I've been busy, and there were festivities and parties, so this got pushed back a little. The good news is that it's done, the bad news is I'm not sure how I feel about it. I'd love feedback on it, seriously. I tried for something more dramatic and moody, instead of a generic broadly lit scene. Now that this is done-ish, I'll start working on Tristan and his story. And you think I was joking, but I want feedback!!!
Please?
Posted by Matt Swartz at 8:52 PM 3 comments: 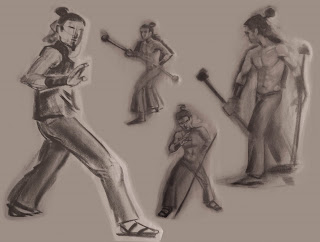 Here are some figure drawings I did during a workshop at work. Nothing serious, just 10 mins. poses. Let me know what you think.
Posted by Matt Swartz at 12:30 AM No comments: